I remember asking myself “how many donuts will I eat in January?”

Well, since January IS my birthday month… The limit does not exist.

Obviously it’s no secret that the donut obsession is SO REAL, and it all started when I first moved to Los Angeles in 2011. It took about a week in this city for me to come to the beautiful realization that Los Angeles has a donut shop on just about every corner in every neighborhood across the entire city.

I guess that’s why they call it The City of Angels. Only angels know that donut shops belong next to DMV’s & gas stations, across from the studios where I film, next to my old laundromat in Echo Park, along the route to my little brother’s high school (I pick him up everyday because I’m awesome.. and also because donuts), inside my local Westfield shopping mall, and now available for delivery via Postmates & Uber Eats, because CALIFORNIA UNDERSTANDS ME. 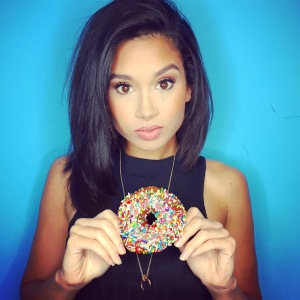 (Disclaimer: That’s not why they call it The City of Angels)

So, yes. January was filled with joy because my belly has constantly been filled with donuts. 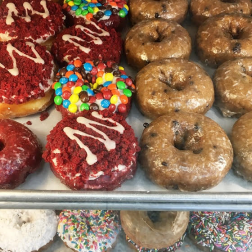 I have never felt so full as I did on my 25th birthday. Until the next day, because I ate all the leftover donuts. ALL OF THEM.

I should probably take a break from donuts. I won’t, obviously, but I probably should. But I won’t.